How The Subconscious Mind Works

Insights Into The Subconscious 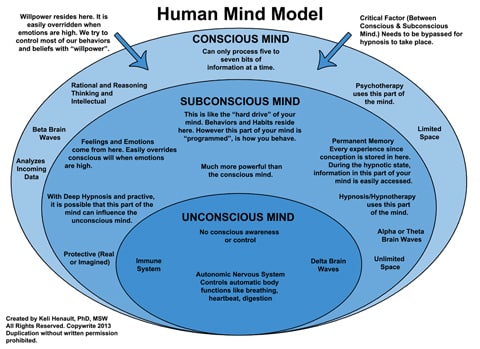 The subconscious mind is the most powerful part of your brain and stores vasts amounts of knowledge and experience and acts like Random-access memory also known as RAM in a computer.

The subconscious mind consists of both the old reptilian brain and the mammalian brain.

Each of these two evolutionary brains developed without the need or capability to process time or tell the difference between what is imagined and what is real.

They are basic brains and do there job extremely well but lack the finer abilities of logic and evaluation in decision making that the later evolutionary development of the neocortex has provided man.

The subconscious mind is so called because it ACTS below our conscious awareness and is responsible for many of the things we seemingly do on ‘automatic’.

It consists of our survival instincts with the added layer of complexity provided by the emotional brain in over-riding basic instinctual desires and fears.

But it does have access to the brain’s memory.

Even though we think we are in control of our lives much of the actions which make up our behavior is actually outside of our control.

The subconscious mind plays a very big part in how we see and react to the world around us.

Often our subconscious mind is in conflict with what we want consciously and that is the reason why we often contradict ourselves.