Although many of us like to think we make decisions based on reason and logic it is fascinating to understand just how much our life is actually controlled by unseen forces deep within our unconscious mind. 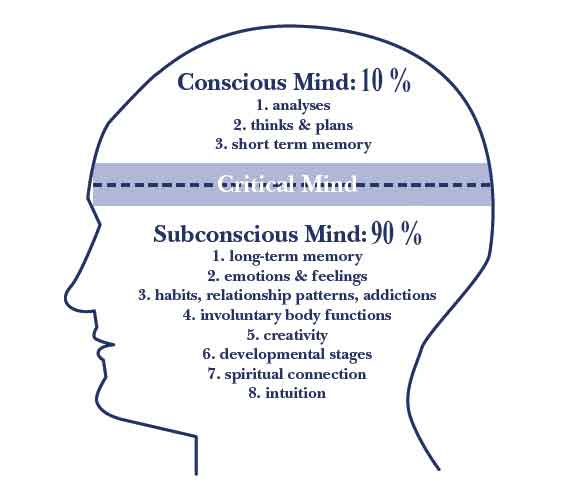 Often we may act for less obvious reasons and even against our own best interest.

Carl Jung and many other psychological schools of thought both early and present have attempted to understand this phenomenon of perception, decision making and influences on our behavior.

Most subscribe to a system of two brains. One the conscious and the other the subconscious or unconscious mind.

Often our conscious mind will rationalize our behavior based on logical conscious reasons when in fact it is plain for others to see we are actually reacting to ‘learned’ subconscious inputs.

Strong emotional experiences from the past can color our perception in ways we just don’t ‘see’ anymore and the conscious mind does a great job of covering up the cracks in our logical reasoning.

It’s as if there is some hidden conspiracy to hide the real truth from our selves.

We literally perceive things not as they are but as our mental model and expectations dictate.

When we purchase something rather than that decision being based on quality or need, we are often influenced by such things as packaging, brand awareness and price differentials i.e. discounts.

A severely discounted product from an inflated price will always outsell a normally priced item even when the final price is exactly the same.

Our decisions are often based on our notions of reality rather than objective reality.

Similarly, our memories seem to be very selective enabling us to recall what we think happened rather than what really happened.

This power of modified perception can even extend outwards to others. Actually affecting others. Studies have shown that teachers expectations of students abilities influenced in reality how well they actually did through the nonverbal, tonal and other interaction subtleties.

Appearance and other nonverbal cues will assign positive values to a person merely if someone is more photogenic or younger etc. Regardless of whether there is concrete support for that belief.

Stereotyping in this way seems to be a shortcut to decision making when pressures of time or laziness mean relying on automatic unconscious processes is just easier.

Conversely, studies have shown that we can easily be divided into groups and exhibit bias, discrimination and even violence against the other arbitrarily created group merely based on meaningless distinctions that have no basis in reality.

Instead of acting for the greater good we are quickly segregated to discriminate in favor of ‘our’ group.

What we do and why we do it is a fascinating subject with much still to be learned.

Subliminal forces seem to rule many of our decisions and actions in a world full of powers far greater than our selves.

Whether merely an illusion or not the unconscious serves to empower us and create a positive sense of self.

Even though we may sometimes buy something not because we need it but because it just makes us feel good and bolsters our self-esteem.