Research over the last 20 years suggests strongly that we are all able to assimilate an unconscious network of associations much easier than was previously thought. 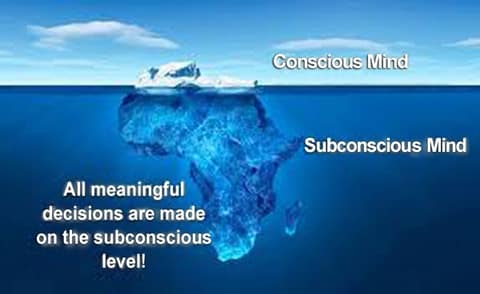 What is known as subliminal priming can activate powerful unconscious desires or associations even though we do not consciously register them.

Advertisers have long known that the unconscious is so persuasive a part of human cognition that it can change or modify human behavior.

A good analogy for subliminal priming is when you hear or read a word it tends to get “warm” so to speak. The effect can soon fade but you are more likely to use that word or a similar word for a certain amount of time after having been exposed to the priming word. So subliminal priming is best described as leaving a kind of heat signature in your mind that you are more likely to go back to because it is “warm”.

And the best things to prime are words or images that create feelings or emotions within us. In a famous study, a Canadian company flashed “Phone Now” many times during a TV show and were surprised to get no response. That’s because “Phone Now” has no emotion or associated feeling attached. They would have been much better off using something like “Talking Feels Good” or showing an image of an elderly woman, for example, to bring about their desired intent.

SUBLIMINAL PRIMING & BEHAVIOR
Experiments in human behavior associated with the powerful unconscious desire for oneness used the priming words “Mommy and I are one” and showed a marked improvement by patients in adaptive functioning.

This approach can even be used when people are trying to give up something seemingly unrelated e.g. smoking.

By stimulating an unconscious desire for oneness or connection it seems it can unleash the powerful capacities of human behavior ranging from optimism to self-discipline.

REAL WORLD APPLICATION
Academics
Participants in a study which were exposed and primed with words related to intelligence showed long-term effects and achieved significantly higher grades than others who did not participate.
Smoking
People who received subliminal messages showed improved progress in attempting to give up smoking as well as having a lower rate of lapse after regular therapy.
Learning
University students who received subliminal messages performed better in their end of year exams than students who only received the control message. Researchers found students learned more efficiently when subliminally stimulated to feel better about themselves.
Memory
In an audio experiment which tested no sound against supraliminal sound and subliminal affirmations, only the subliminal group showed significant improvement in performance.

PRECOGNITION & SUBLIMINAL PRIMING
What is even more amazing and perhaps almost unbelievable is that is has been shown that it is possible for subjects to somehow know in advance when a startling stimulus is to be experienced i.e. by sweating.

All these experiments and findings point to the fact that our brains may be much more complex and have far greater capabilities than we have ever imagined.